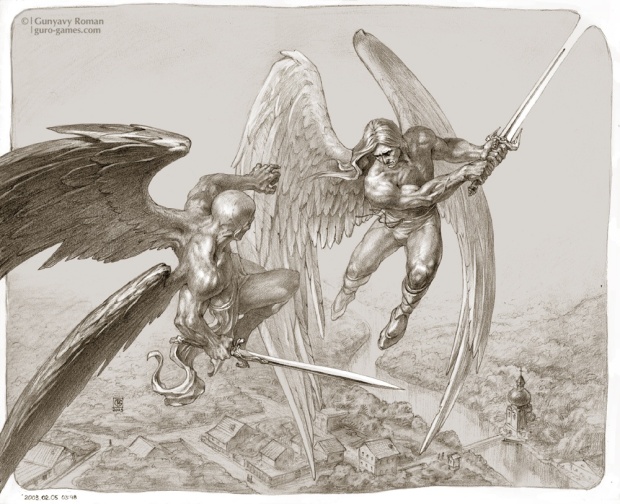 For though we live in the world, we do not wage war as the world does. The weapons we fight with are not the weapons of the world. On the contrary, they have divine power to demolish strongholds. We demolish arguments and every pretension that sets itself up against the knowledge of God, and we take captive every thought to make it obedient to Christ.

And if ye cannot be saints of knowledge, then, I pray you, be at least its warriors. They are the companions and forerunners of such saintship

Born is the battler who make peace.
The all-good highest of the gods gives you three tasks;
Destroy death, strike the enemies, and cover the whole
Paradise of Light! You paid homage and went out for battle
and covered the whole Paradise of Light.
The tyrant prince was bound forever and the dwelling place
of the Dark Ones was destroyed.
The Light Friend, Primal Man, remained until he carried
out his fathers will.

– The First Hymn of the Primal Man

– Hymn to the Living Soul, A Manichaean hymn in Parthian.

“O best among men [Arjuna], the person who is not disturbed by happiness and distress and is steady in both is certainly eligible for liberation.”

“That which pervades the entire body you should know to be indestructible. No one is able to destroy that imperishable soul.”

“The material body of the indestructible, immeasurable and eternal living entity is sure to come to an end; therefore, fight, O descendant of Bharata.”

And as to what, again, they say of sleep, the very same things are to be understood of death. For each exhibits the departure of the soul, the one more, the other less; as we may also get this in Heraclitus: “Man touches night in himself, when dead and his light quenched; and alive, when he sleeps he touches the dead; and awake, when he shuts his eyes, he touches the sleeper.”[4] “For blessed are those that have seen the Lord,”[5] according to the apostle; “for it is high time to awake out of sleep. For now is our salvation nearer than when we believed. The night is far spent, the day is at hand. Let us therefore cast off the works of darkness, and put on the armour of light.”[6] By day and light he designates figuratively the Son, and by the armour of light metaphorically the promises.

– Clement of Alexandria, The Stromata, Chapter XXII: THE TRUE GNOSTIC DOES GOOD, NOT FROM FEAR OF PUNISHMENT OR HOPE OF REWARD, BUT ONLY FOR THE SAKE OF GOOD ITSELF.